You can’t all be winners 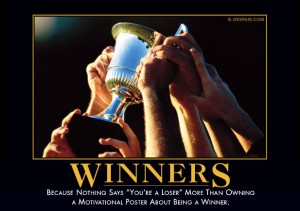 A while back there was this rage for motivational posters that were supposed to push us all to be the best. To be winners and achievers. It was all a lie. There can only be one winner at anything. That’s the whole point of winning: to come first. Most of your dreams and aspirations will never come true, no matter how hard you try you will fail at most things. This doesn’t mean you can’t be successful, we can all excel at something, but we can’t all be winners.

You will not be a millionaire

You will probably fail

Loads of people dream of running their own business and many do have a go. But most will fail. The business owners may be brilliant at marketing or have an eye for opportunity but to succeed you have to be in the right place at the right time with the right product at the right price. People look at Facebook and other successful Dot com companies and believe they can can do the same. You can’t. There is only one Facebook, one Twitter, one eBay, one Amazon. Everything else is something else. Cloning an existing product or service may have limited success but it’s not going to make you rich. If you want to succeed in the long term you have to launch something different at the time when people are receptive. The problem is you often don’t know if something is going to work until you launch. Which is why many fail. There is nothing wrong with failure, you aren’t a loser no matter how much the Douchbags tell you, it’s part of the natural cycle of business. Reading the biographies of many successful business people you will see that many of them failed multiple times before the hit the Jackpot. Failure is more common than success.

But you are not a loser

Just because you aren’t off to exotic location in your private jet doesn’t mean you have failed. You just need to set realistic goals. Accept that you probably won’t make a million in your first year of trading. Accept that you may well have to change your business plan when the order books fail to fill. Accept that you can’t afford a new car this year or take a long holiday. Make predictions based on market research. If you can only make one widget per day with a profit of $100 then your income is only going to be $36,000 even if you work 7 days a week.  If you are selling stuff on eBay and making £1 profit per sale you need to sell 30/day to make £10,000/year. It’s amazing how many people I meet that just can’t do these basic forecasts, they seem unable to see you can’t just scale up a business to make more money. A plumber can only fit one boiler a day. To do more would mean taking on more staff which would mean more expense for less profit.

So be realistic. Do the sums and calculate how much work you can reasonably earn and decide if it’s worth the effort.

Don’t fall for the Marketeers

There is a huge industry (mainly America) where experts and gurus try to convince you that following a certain business plan will net you million of dollars. It’s not true. Some might but most won’t. Waking up in the morning and saying ‘I’m a Tiger’ to the bathroom mirror won’t earn you a penny. Selling discount socks on a market stall won’t make you a millionaire. Don’t spend a penny on a $199 plan from some orange faced marketeer who promises your wealth and riches. The only one making any money is them.

Are you struggling with ranking, attracting visitors, generating leads or getting sales?

Or are you just stuck not knowing what to do next?